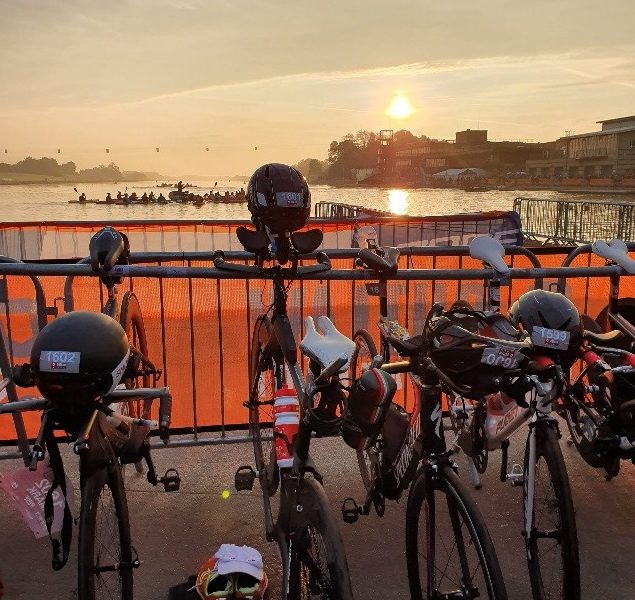 What a morning, the forecast had been unclear, but to be met with this view when entering transition as 6am on Sunday morning at the middle distance Outlaw was really quite special.

Being one of the older competitors I was in the last wave and it wasn’t long after arriving that the first wave were ready to start. The race organiser had held us on tender hooks before revealing the temperature of the water 15.6 °C, which was a lot warmer than I expected and didn’t leave me wondering if I should have neoprene booties or gloves to compliment the wetsuit. Having watched more and more waves start it soon became clear that we were next, 250 of the “older” men entered the water, the last wave at the back of some 1250 other athletes.

It was a busy start with some jostling for position lasting longer than I would like and even by the time we reached the first buoy at 1km the half way point, my stroke was still being disrupted – next time I will find clear water. I cleared the second buoy and started spotting the tower a significant landmark where we would exit the swim.

Out of the water and jog along the matting towards to the depleted bike racks, spotted the flag that helped navigate to my bike, wetsuit off, crash hat on, shoes on and off.

Having competed in the event last year I had a good idea of the course and the power numbers I needed to hit but was disappointed to see I was already down some 5-miles into the ride especially as my legs were telling a different story. Increasing the effort and the level of discomfort I got back on track passing many riders strung out in front.

Glancing up I spotted the only significant hill on the course and started notching down the gears knowing that I would have to switch to the small ring to tackle the climb – I clicked the front changer and just a whirring noise, no gear change, I clicked a couple more rear gears thinking that may kick the front gear over – I come to a grinding halt as the chain drops and gets chewed up through the front mechanism. Stay calm – a few fellow competitor checks I’m okay as I get to work freeing up the chain and hoping I can finish this race. A minute or so later and I gingerly push off up the hill, so far so good. But all isn’t right the chain is hopping in and out of the gear, 5th to 6th to 6th to 5th , very annoying but ridable.

With around 12km to go I am stuck in traffic that is backing up behind slower riders, I have no choice but to back off and accept that it will help the run legs. I enter transition looking forward to a half marathon – yes really!

I exit transition and head off past the first feed station where our loyal supporter are cheering us on. Steady my pace and hope the ankle and Achilles issues that have plagued me for months stay in back ground. It was a busy run along the tow path with runners in both direction and some fairly close manoeuvres as people over take in both directions. Back out on the tarmac around the lake and I take a band that confirms one lap done. I check the time and it looks like I am not far off my time from last year – I start doing the sums, where do I need to be to beat the time? Every 2km and I grab some water at the feed stations, some to drink and some over the head as the sun was out and it was getting pretty warm. I see our supporters again and check my watch, 15-min to get around the lake – knowing the bike was down I reckon I must still have some power left in the run legs so I up the pace.

5-mins later I’m getting some feedback I don’t like, signs of cramp in my lower calf, both legs – I convinced myself that it won’t get worse and pushed on, then a spasm and I let out a wince, a few more steps and my left foot spasms inwards at an awkward angle, land it, and the next step does the same, I’m going to have to back off else I’m not going to finish at all. I take the last couple of kilometres very easy, and am pleased to hear the finish line noises.

Insight of the finishing carpet and someone sprints past me, looked like my age group! Crossing the line some 4hr 47-min later I find that I missed second place by 14-secs and it was indeed the guy who sprinted past.

A few lessons learnt through this event, seconds count even in a long-distance event, and that mechanical, well I knew there was a problem before the race and thought I had fixed it, clearly not. Dave